Which Nordic country has the gloomiest Christmas songs?

Artificial intelligence is often linked to complex problems that are difficult, or impossible, for humans to solve. For example, when studying the effects of medicinal drugs in the body, artificial intelligence can be used to explore how the three-dimensional structure of complex molecules comes into being. In this case, modelling helps replace years of experimental work in the laboratory. However, artificial intelligence can also be applied to solve much more common and simple problems. Tapio Linkosalo, Analyst at Innofactor, used sentiment analysis to determine the gloomiest and most cheerful Christmas songs in the Nordic countries.

“Despite the grandiose name, artificial intelligence and its applications mostly boil down to plain and simple statistical modelling. AI applications are highly automated and therefore well suited to the processing of large sets of data. They are also capable of identifying subtle interdependencies in data, which easily go undetected by humans. The analysis of the gloomiest Christmas songs is based on a sentiment analysis of text, which is really elementary for an AI application. In other words, the starting point for our problem-solving efforts was good,” says Linkosalo.

“Sometimes, the evaluation of an individual word may be unexpected. For example, a fan of gothic horror may describe a movie as being ‘wonderfully grim’, which results in the word ‘grim’ getting a positive evaluation. However, since I used thousands of reviews, each individual word got a number of different results, so I expect that the average of these results closely corresponds to the typical sentiment of the words,” Linkosalo explains. 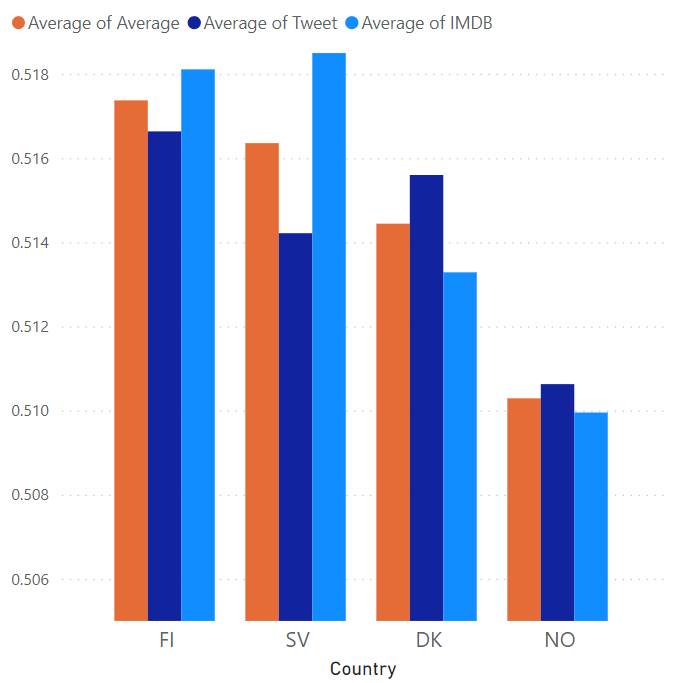 The result of the analysis was surprising. According to the model, the most cheerful Christmas songs, on average, come from Finland. An analysis based exclusively on the IMDb classification put Sweden slightly ahead of Finland. According to all the calculation methods, however, Norway was home to the gloomiest songs.

“The results presented a number of surprises. For example, some of the songs that were classified as gloomy really sound quite cheerful. The AI model I used is still incapable of reading between the lines and instead analyses single words without understanding the whole context. In this respect, the model still has room for improvement,” says Linkosalo.

The most joyful and gloomiest Christmas songs

"Score" measures the mood of the song. The bigger the number, the more joyful the song.

Listen to the 20 most joyful Xmas songs on Spotify.

Listen to the 20 most depressing Xmas songs on Spotify.

Innofactor
Innofactor is the leading driver of the modern digital organization in the Nordic Countries for its over 1,500 customers in commercial, public and third sector. Innofactor has the widest solution offering and leading know-how in the Microsoft ecosystem in the Nordics. Innofactor has over 500 enthusiastic and motivated top specialists in Finland, Sweden, Denmark and Norway. In 2015–2019, the annual growth of Innofactor's net sales has been approximately 10 %. The Innofactor Plc share is listed in the technology section of the main list of NASDAQ Helsinki Oy. www.innofactor.com #ModernDigitalOrganization #PeopleFirst #CreatingSmiles